Cruising across the choppy Juan de Fuca Strait was made more enjoyable with the appearance of whales, not quite surfacing in a blow but rolling along with us toward Vancouver Island. Back in Port Angeles we’d made reservations through “Bob” for The Gatsby Mansion B&B. The Mansion sits right on the Inner Harbour of Victoria, within walking distance of the ferry. My Blue Bonnet was loaded with lots of gear: our personal stuff, food and frig, and all the paraphernalia from the Women Writing the West raffle. No walking for us. Free parking is a rarity in town and with a great breakfast, we spent wisely here…even if a third floor walk-up.

The Gatsby was built in 1910 by the Gold-Rush-wealthy Pendray family and changed hands and function over the years. In 1997, the home was transformed into The Gatsby Mansion and, yes, it is named for F. Scott Fitzgerald’s novel, THE GREAT GATSBY. How could two writers NOT stay here? Anne and the receptionist worried over my ability to manage the many stairs to our room. I managed by doing it only once a day and loved my Victorian dream home.

We were in Victoria to find and follow writer and painter Emily Carr (1871-1945,) a contemporary of Georgia O’Keefe, Frieda Kahlo and Grace Hudson. I first learned of Carr on a previous trip to the island and fancied writing a novel about her. Susan Vreeland beat me to it with THE FOREST LOVER.. We found her birthplace home and wandered its gardens where notes from Carr explain what was where in her day. The home is only open May to Sept. Still, in warm sunshine it was easy to picture her in childhood and later when her sisters tried to convince her to return; ultimately she did go home, but only after a life of near-poverty, doubts and traces of egomania and cantankerous mood swings.

At the Royal Museum of British Columbia, Anne and I found much of interest about the First Peoples, including examples of the totems Carr traveled far and wide to paint in hopes of preservation. A small glass case showed samples of her watercolors, pottery and artifacts. At the Art Gallery of Greater Victoria, a room is devoted to Carr’s art with her quotes posted at each piece. Carr was a very complex woman and artist; I won’t try to tell you her story but hope you may look into her. Some think her writing surpassed her painting.

In Victoria, we wined and dined modestly, searched out Nanaimo Chocolates, found a quiet Provincial Park of Carr’s red cedars and marveled at our good luck in being there in glorious full color. Our final day put us in Sidney, heading for the ferry to Vancouver and home. We stopped in here because it is known as “BOOKTOWN” with eight to ten bookstores within easy reach. We found treasures, of course, including great bargains at a boutique shop; we indulged ourselves.

The ferry went smoothly over the waters and we were soon at the border crossing with a smiling border guard and his stern cohort. We handed over our passports and were grilled on why we went to Canada. These boyos together didn’t add up to my age, I’m sure. Asked about bringing in produce, Anne claimed  her apples from San Luis Obispo while I denied having anything. Toughy kept at me, wanted the back doors and trunk opened and continued to press about citrus and I kept denying. In plain sight in the backseat was the orange that had traveled from Santa Rosa and I’d forgotten I hadn’t eaten. It was Chilean! And confiscated. With threats of BIG fines. I hope it was dried out by the time he ate it.

Moving south, we revisited the Aurora Colony and caught the Quilt Show, voted our favorites, drank tea and moved on. Stopped overnight at Grant’s Pass for a quick dinner at the neighboring sports pub. Two hours later, we emerged full of all sorts of spirits after light dinners, heavier drinks, and two games of trivia with questions about who wore #42 in the NFL (?), what are baby bats called (pups,) in what state did the wild animal guy free his menagerie before killing himself?(Ohio)…you get the picture.

Our final day on the road had us speeding to Sacramento and separation. After thirteen days together, we have a stronger friendship built on shared experiences and memories. I am  glad for Anne’s company, thoughts and writing talk. It would have taken another week if I’d gone alone for I run out of stamina much sooner than she does; thank you Ms extra-ORDINARY APHRODITE. See her blog: Anneschoederauthor.blogspot.com.

As I write, I am in South Lake Tahoe where the days are mid-60s and the nights in the teens. To use as setting for a contemporary novella, I searched for a favorite old campground in the Crystal Basin area and think I found it. The steeply sloped, one-lane dirt road dropping off into wilderness didn’t faze me…until I was about half-way down. Thinking there’d be no one to know just where I was at, or able to hear my car crash, the bear roar or my pleas for help…I made a careful turn-about.

Rather than a question, I will leave you with a quote from St. Augustine:

“The world is a book and those who do not travel read only one page.”

Before there were blogs, FaceBook and sundry other electronic ways to communicate there was email. In years gone by, I used to labor over journal entries, sometimes transferring them into longish emails accounting for TRAVELS WITH MOSES. Moses was our Basenji, rescued from the  local pound. He was more cat than dog, short haired, pointy eared, silent–a barkless dog breed from Africa who travel on the shoulders of a hunter to find lions! Independent, obstinate and a runner, our Moses stole our hearts and then broke them when he disappeared near Tyler, Texas.

A life time later, I’m on the road again with writer friend Anne Schroeder and we’re in Medford, Oregon for the night. Do you like driving in fog, rain and sunshine? From the flats and rice fields of Sacramento through the wide open spaces of Highway 5’s lonesome hinterlands we sped, slowed, stayed close to the speed limit or not. All depended on the amount of rainfall from minute to minute, how heavy a foot hit the pedal and getting lost in writerly conversation. Then, there were the rivers, streams and arched bridges to drool over.

Passing through towns, villages and hamlets with names like Corning, Red Bluff, Cottonwood, Sweetbriar, we met up with Shasta. A heavy cloud layer sat on Mt. Shasta, the 14,000’ lovely volcanic home of Big Foot (mythic or real?) The mountain, its top half cut-off by clouds,  looked more like Acoma or
another New Mexican mesa…stately, impressive and a bit intimidating. Coffee and blackberry cobbler and pumpkin spice cake at the Hi-Lo Cafe,  in the same family for 60 years, nurtured  us well and we went on our way. 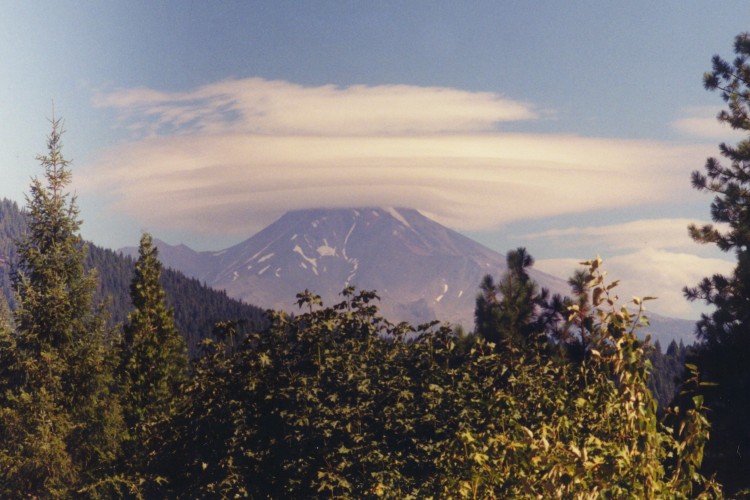 If I had taken the picture I should have, you wouldn’t be seeing so much of Mt. Shasta. ENJOY!

Now what do writers talk about as they skim mountain roads and passes at 55-75 MPH? They talk about anything that strikes their fancy. In our case, we covered family, writing and writers, books we’ve read or are reading, have written or plan on writing. Sharing horror stories about self-centered, non-reciprocating published authors kept us busy for a good little while.  As our stories grew, so did the mountains, trees and hills along our way. The sky cleared and threw out the sun from time to time, warming the cockles of our hearts and lighting our spirits. The trees came taller, wider in the colorful hues of pine, redwood, and cedar with a few autumnal oaks in changing cloaks.

When two friends venture out on the road together for the first time, there are lessons to be learned, communication problems to work through, decisions to make. Finding each other’s style is part of the process…one I last experienced when my son and family moved in with me. It is all about negotiating time, space, feelings and expectations. In the latter, I have too often lapsed in expressing myself, operating instead on assumptions. At this point, all is smooth sailing/traveling  and I fully expect it will continue to be as we head to Oregon’s Aurora Colony which Jane Kirkpatrick has written of so well and wisely.

ANNE’S TRAVEL TIP: when you’ve looked high and low for your telephone charger and it is no where to be found, check with the front desk for lost and left behind chargers. She did and is now a much happier camper.